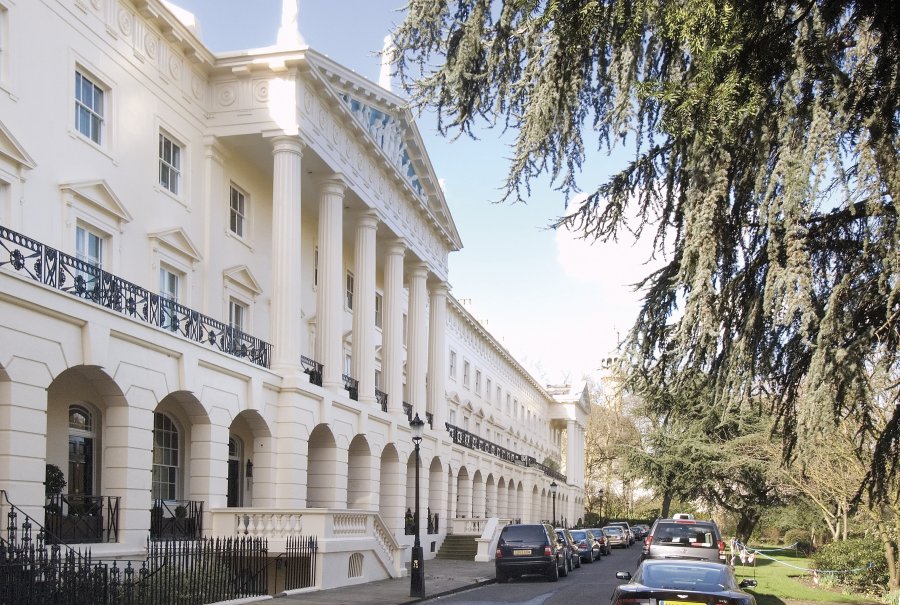 Stroll along the streets around Regent’s Park and there will be an air of familiarity. The neat Regency villa-style houses and palatial neoclassical terraces constructed of Portland stone are instantly recognizable and characterise this corner of the capital.

While John Nash is the immediate name that springs to mind, the unmistakable architecture is also the work of Decimus Burton, who was given to Nash as an aspiring 18 year-old apprentice in return for Burton senior – a successful property developer - bailing Nash out of financial difficulty. Together, Nash and Burton junior master-planned a vision of residential bliss in Regent’s Park at the command of the Prince Regent, who later became King George IV.

“The Prince asked Nash to make his wish for a set of fabulous palaces in Regent’s Park come true, with homes positioned along the Inner and Outer Circles of the park to house his friends,” comments Behr & Butchoff’s Paul Bennett. “The combination of crisp white plaster, inky black wrought iron and Doric columns are hallmarks of the Nash/Burton partnership, and the designs have stood the test of time to become architectural, era-defining classics.”

John Nash is generally considered one of London’s leading architects, with contributions that include Regent Street, Clarence House and Buckingham Palace, as well as the onion-domed, Hindoo-influenced Royal Palace in Brighton.

Burton was a keen exponent of Greek revival, Regency and Georgian styles, and is credited for creating Hyde Park, London Zoo and the Royal Botanic Gardens. In fact, Cornwall Terrace, Clarence Terrace and Regent’s Park’s eight impressive villas were designed by Burton (although the original plan was to build 56 villas).

It is Nash and Burton’s sense of symmetry, pin-sharp lines, detailed flourishes and grand proportions that still hold sway with buyers and tenants in London. Hanover Terrace, Chester Terrace and Cumberland Terrace are still coveted in prime Central London and a move to one of these addresses almost guarantees a slice of royally-commissioned architecture.

Today the cool and the creative rub shoulders with royalty, international dignitaries and the jet-set glitterati, who snap up properties – as rare as they come to market – in the eleven main streets, squares and crescents that bare the royal architectural touch. “If a buyer requests a home in Regent’s Park, they almost always get shown a Nash/Burton property by default and we find many movers simply request ‘one of those big white terraces overlooking the park’,” says Paul.

“As far as prices are concerned, Nash/Burton terraces achieve a high pound per square foot value based not just upon their architectural heritage – although it helps - but also because of their exceptional location and views across Regent’s Park.”

Paul adds that even within the Nash/Burton portfolio, some residences hold more value than others: “There are a number of very special Nash houses within Regent’s Park, referred to as villas, and these detached properties are greater in width than their narrower terraced counterparts. They do, therefore, command prices substantially more than other local properties.”

If you own an architecturally-important or listed residence and would like a property valuation, Behr & Butchoff can use its experience in selling distinguished properties to provide an accurate figure. Likewise, we are happy to help buyers and tenants specifically looking for Nash/Burton, Regency, Edwardian or Georgian homes in prime London.